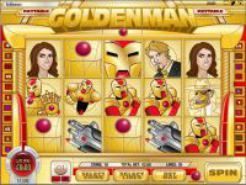 Who is Golden Man?

What could be a take off on the hit movie Iron Man, Rival has released a game called Golden Man Slots. Presented in all gold, this is a slot game you won’t want to miss as its action-packed bonus round is particularly exciting. Play Golden Man Slots at our featured Rival Golden Cherry Casino because you ain’t seen nothing like it!

A 5-reel, 20-payline bonus video slot, Golden Man has a jackpot of 500 coins. This is the perfect game for new online slot players as it is easy to play and is only $20 per spin. There are 17 winning combinations, so we recommend you read the pay table before you begin.


Who is Golden Man?

Ah, that’s the question. The cast of characters reads like a who’s who of heroes and villains from such series as Batman, Superman, and the current Iron Man series. You will meet Tim Karat, Lisa Lode, and Fool’s Gold. Other important symbols include: an Atom, Gold Bar, Golden Man, Gold Fly, Gold Hand, Gold Mask, a Gun, and a Rocket. The Rocket is the wild symbol and when it appears in a winning combination it will expand the reels. The Gold Fly is the scatter symbol. When you get three or more Gold Fly symbols, you will win 15 free spins, each winning spin paying double.

This is where the action begins! Get three or more Flying Goldenman symbols and you will activate this special bonus round. Here you will be asked to assist Golden Man to shoot down a number of planes. There are 16 in all. The more planes you shoot down, the more prizes you earn. And the prizes are huge!

For a chance to win lots of money and have a great time doing so, we invite you to play Golden Man Slots .

Where to Play Goldenman Slots