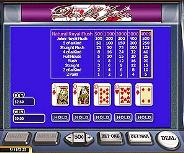 Video poker is a recent addition to the online casino game line up. It comes in different types and format. Video poker is a game that is both exciting and very rewarding. The game is also simple that almost anyone could probably just sit and play.

Single-hand Double Joker is just an example of a video poker game. This game made the usual poker game format a little more unique by expanding the standard fifty two-card deck by adding the joker as wild cards, making the game more enticing due to the higher probability of winning.

The jokers in the deck serve as your wild card. Wild cards could take any value of any card with any suit in the deck. This means that with a wild card in your hand it will be easier for you to attain your winning combination. Having the Two Pairs as the lowest possible wining combination is also a nice feature for this particular video poker game, most video poker game starts with Three of a Kind as the winning combination. The highest possible payout is attained when you have a natural Royal Flush in your hand. Natural means that you did not use any wild card to attain the Royal Flush.

A video poker game is actually a cross between a slots game and a poker game. We use the concept behind the poker game for the card combination but the betting and the machine itself is derived from slots. Playing video poker is easy because every thing that you need or want to do within the game is provided with an appropriate command button.

All you have to do is place your bet which could range from one (1) to five (5) coins. After the bet you are given five cards. Once you have seen your cards you will then decide which card to keep and which to discard. If you were able to attain a wining combination you could then decide to double your money or collect your prize. The value of your winning depends on your winning card combination and the number of coins that you have initially bet.