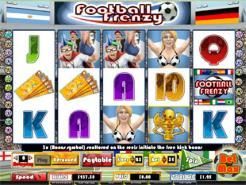 Play Now
Football Frenzy is an online slot game developed by Cryptologic. It offers a superb and familiar layout with 5-reels and 25 pay lines. The stakes range from one cent all the way up to $500 per spin, attracting high rollers and penny wagerers both. The game has some exceptional, unique features such as a Wild and a Scatter. There free spins with extra multipliers on offer, and the game sports an excellent gambling feature, which could double the winning payout. The game has a beautifully coloured design which is really stylish. It will appeal to most players’ tastes and is a Graf amalgamation of exciting slot casino action and the beauty the skilful game of football.

Winning payouts are won by landing a minimum of three identical symbols directly on the reels, from left to right of the screen. The exact amount of the payout will be calculated according to the bet per line. A unique index multiplies the stake for each of the combinations., and this can be checked out on the pay table. The game has a pretty substantial maximum payout, which rises to 2,000 times the wager.

The game symbols that appear on the screen are mostly images of celebrating fans, party balloons, painted in the colours of different teams. There are match day tickets, fan's scarfs, the FIFA World Cup along with some high card values. The latter include the numbers nine and ten, along with the letters; J, Q, K, and A cards. There is also a particular power symbol; the Football Frenzy Logo.

The game serves up a great collection of special symbols. They include the Scatter, which is represented by the game logo. The Wild is the football icon. Both these symbols provide additional chances for players to win a payout of some sort. The Wild can turn up on the second, third, fourth and fifth reels. It will subsequently replace other standard game symbols to configure winning combinations and high payouts. It cannot replace the Scatter symbol, however. The Scatter plays the part of the bonus system. It activates the bonus game wherever three of them pop up on the reels.

The Football Frenzy Bonus game immediately awards players eight free spins with double payouts for landing a minimum of three football Scatter symbols. Players get to choose their favourite flag at the beginning of the round. If it appears on reels 1, 3 and 5, additional free spins are given out. The player can win as many as 50 free spins during the round itself.

The brilliant interface is super intuitive to use and affords complete control over the wagering process. The betting is effected upon the 25 pay lines, and the multiple coin values provide the ammunition for the stakes. The betting starts from a minuscule 1 cent. Many different coin values rise incrementally to a top value of $20 per coin. Only a single coin may be placed on each pay line. The maximum bet the game offers is an impressive $500 per spin! High roller will enjoy that one, while the penny wagering will be of interest to novices. The user-friendly game control buttons and windows are located on the control panel conveniently set under the reels for easy access. The various buttons and informative windows are self-explanatory and include the following; the Spin button, Bet Max, Bet, Lines, Autoplay, Play, Advanced, Speed, Balance, Paid, and Total Bet. The pay table is also prominently displayed. There are country flags above the main window, where players can select one of them in the window on the left-hand side of the screen. Players can even decide which colours to paint a few of the symbols.

Football Frenzy is available as a mobile version. It provides a thrilling experience and has been streamlined and optimised especially for mobile gaming. The game can be enjoyed on a tablet and smartphone and is compatible with their respective operating system. There are a couple of options to play the game, to download the game to a mobile device, or the PC. The other possibility is to play the game using Instant Play mode, without having to wait or download the game.

Football Frenzy is an enjoyable slot game, which grows on you the more it is played. It caters to players with all bankrolls and budgets, due to its versatile wagering system. The theme is a good blend of slot action and footballing magic. The symbols are originally crafted and designed contributing much excitement and pleasing casino action. Overall Football Frenzy Slots is a well-structured game with plenty of chances to win a payout. Enjoy the beautiful game on a casino environment and taste the difference!
Play Now