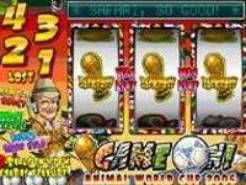 Play Now
Welcome to play Game On! Online Fruit Machine! The African sunset in the background and the safari guide will lead you through the African jungle to the soccer world cup to find your hidden treasures. This game, developed by Microgaming is one of their single line AWP slots. These games are great as they involve some skill and plenty of interaction. On the reels you will find randomly awarded nudges. These are when you are able to nudge the reel down to the next symbol. You are able to nudge the same reel as many as 4 times in a row. This striking game also offers the ability to bank your nudges to be used later. When the option comes up, use some of that clever footwork to score when the better opportunity arises. If you are feeling lucky try gamble those nudges with the gamble nudge feature. They can be doubled or you can lose them.

The game is based on the features traditionally found in AWP slots. These are the nudges, the ability to gamble them correctly and to bank them to use later. Using nudges is a crafty trick indeed. Having banked nudges puts you at a clear advantage because instead of nudging randomly you are able to nudge at will. Practice using the nudges by using the practice play version to get the feel for it. Don’t forget to use the sneak peek arrows that show you what is in store higher up the reels. Setting the bet is easy. You have a single line and that line can only take one coin. The value of the coin is the only variable here and can be adjusted from 1c to $10. Payouts are also done in coins so the greater the coin size, the higher the bet and the bigger the win. The bonus round triggering soccer ball fall on the reels at random and are not even included in the paytable. So your chances at getting more balls are not changed in any way by your bet. The bigger the bet, the bigger the win of course. But right in the beginning of this game to keep you in it for longer and to increase your odds at being awarded and playing the nudges as well as the bonus game, keep your bet low. As the wins start making a difference it is then time to increase your bet.

Keep the eye on the paytable

Possibly the most wanted symbol is the ball. Overlaying other symbols this ball is a non paying symbol on its own and only triggers the bonus round. The jackpot symbol is the golden trophy. This pays out 100 times your bet. Other symbols include a red and white soccer boot, a khaki safari hat, a whistle and a mix of pub fruit slots symbols such as the cherry, lemon and the one and only seven.

A bonus with features!

The feature round is triggered when there are three soccer balls on the screen. You are taken onto the field where three safari animals are battling it out for goal. Each of them has a string of balls going from their feet to the goal. The computer highlights each of these ladders one at a time. Each ball on the ladder has a different value with the top jackpot being 1,000 times your bet. The point of the game is to be precise on the button; some practice would see you well in this game. Just imagine at the max bet of $10 you could be taking the golden boot with $10.000.

In the mood for a winning safari?

Get your Game On! and come and open an account today. The safari in the wild African jungle has some wild winnings in store for you. All you need is to download the software. Let the winning streak find you. Game On! Online Fruit Machine is not welcome for USA players! We can recommend for USA players to play at WGT slots like: Safari Slots or at Safari Hunt Slots.

Where to Play Game On! Slots