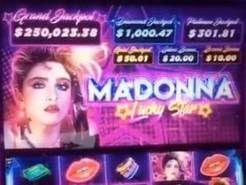 Play Now
It has to happen sooner or later, and Aristocrat has taken the plunge. Madonna Lucky Star slots are the first in a series of slots to be released in future months, covering all decades of Madonna’s music. 58 hit songs, and 38 top ten hits later, Madonna has become an undisputed legend. Madonna Lucky Star will focus on the first decade when she was new and fresh to the music scene. Songs such as Lucky Star, of course, Holiday, Into the Groove, Like a Virgin, Borderline, and other hits that turned Madonna into an overnight pop star; her Lucky Star decade! Madonna Lucky Star is destined to be a number one slot hit.

The slot contains several generous bonuses, special features, and lots of retro symbolism with the backdrop, animations and game icons. There is the Material Girl Bonus, Holiday Bonus, and Lucky ReSpins! Wilds, Scatters and Bonus symbols appear on the 5-reels. The rest of the game symbols include; the Madonna name logo, the Lucky Star game logo, a cassette tape, a microphone, costume jewellery in the form of bangles, and lips! They all depict the lifestyle and fashion of the era, focussing on Madonna, of course. The game offers extensive betting options, with coin values varied enough to attract most types of players. The game is fast-paced and pleasant to play. It should have no problems batting down the competition as there is nothing like Madonna Lucky Star on the market.

Aristocrat has signed a $10 million licencing deal with Madonna, covering all her music output from the last four decades. Aristocrat plans to release a series of slots based on Madonna’s music output. Madonna Lucky Star is the first of those. Since Madonna has such a rich Back catalogue of hit songs, the music and slots will appeal to fans of different ages. Everyone knows Madonna’s music; therefore these slots will be sure-fire hits, especially if the initial outing is anything to go by. Matt Wilson, Aristocrat's Managing Director of the Americas, waxed lyrical about the deal, commenting, "There is no bigger name in the history of pop music than Madonna, and we are thrilled to welcome the brand into Aristocrat's enviable family of licensed product."

Madonna launched her musical career with the song Holiday, which topped the Hot 100 music charts in the USA, in late October 1983. Madonna has been recognised by her peers and the record industry numerous times, and Madonna won a Grammy Award and was inducted into the Rock and Roll Hall of Fame. Furthermore, Madonna holds the enviable title of the highest-grossing solo touring female artist in Billboard Boxscore history. That is some achievement!

Every Madonna slot released under this exclusive agreement with Aristocrat will be unique and have different features, apparently inspired by Madonna’s seminal music. Rich Schneider, Aristocrat’s Chief Product Office confirmed this in a recent interview during the premiere of the slot, commenting that they had been working diligently for several months, in order to create a unique slot game, that perfectly encapsulates the essence of the Madonna brand, while also bringing an entertaining experience to players. The games will be fuelled by Madonna’s landmark and groundbreaking music and accompanied by videos and exciting gameplay. The future looks bright for Madonna fans, slot lovers, and Aristocrat. Bringing all three together has been something of a miracle, and this time the miracle has come true, with Madonna Lucky Star slots.
Play Now