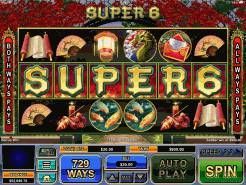 Play Now
A soldier in Kuwait will take home almost half a million dollars after an incredible winning streak at Jackpot Capital Casino . Michael M was playing the slot Super 6 and Jit the big one. Currently, on a tour of duty in Kuwait, he will have a wonderful present to take home with him. In one fateful weekend, Michael made himself into a wealthy man with his daring and bravery on the slots. How did it happen you may ask? It all started with Michael hitting six Scroll symbols with a 10x multiplier, earning his first payout of a substantial $180,000. He didn’t stop there, continued ploughing on until he gained his second payout; this was won with another 10x multiplier spin, landing six Fan icons, which paid out another $116,475! Mickey then went on to hit another six Scroll symbols, this time sign a 5x multiplier, winning $48,000. He didn’t stop there, but forged forward and won another payout of $12,000, thanks to six Fireworks symbols with a 10x multiplier. It kept going, and at the end of the weekend, he was over $541,090 in pocket. While many players would have stopped and cashed out after the first win, Michael kept going and reaped richer rewards. JackpotCapital manager Oliver Smith had this to say about Michael’s massive win; “Michael’s been playing with us for a while now. It's really great to see one of our regulars have such a run of good luck!” On the other hand, Mickey, 46, has massive plans for his lucky, yet bravely won winnings. He had this to say, “The first thing I’m gonna buy as soon as I get home, is an Indian bike and it is going to be decked. I also plan on booking a cruise. And I’d like to see some castles in Ireland.” Wow! Those are exciting plans indeed! Just a few words about Super 6; it is an action-packed, 6-reel slot game with an Asian theme, and Chinese influenced symbols adorning the reels. The game icons show the incredible cultural riches of Chinese traditions. The game also features grouped Wilds, that add even more action winning chances. The Wilds also double winning payouts. The game also features a Scatter feature, which activates the Free Spins round. If the Scatter symbols all appear on one row, during the Free Spins round, they will attract bigger and better bonuses, plus Mega Grouped Wilds, and improved multipliers. Michael went on to say, “I enjoy playing Super 6, but that night I was really upset I wasn’t hitting at all. But then I ran the bed up and got very, very lucky! Another one I like playing is Lucha Libre 2 Slots , but it never hit that night. I really enjoy Keno, too.” It took Michael a little while for the surprise at his extraordinary good luck to sink in. He continued; “I didn’t react too much right away, as I was with a colleague. I went outside and smoked a cigarette to calm myself down. Then, with a clear head, I went back in and checked the computer to see my winnings. Straight after that, I called my wife and sent her a screenshot.” When asked about his lucky win, he had this to say; it’s definitely not just beginner’s luck! I’ve been playing slots for a very long time. This payout was well overdue! My beginner’s luck was after my last deployment, in May 2013. I won a million credits when I’d only played a penny!” This is not the first time JackpotCapital Casino has affected huge payouts, and it won’t be the last. Quality counts at JackpotCapital. That quality seeps into every facet of the casino operations. There are countless slot games, such as the lucky Super 6. Besides, the casino provides an excellent selection of table and card games for all players to enjoy. The customer support services are second to none, and the banking options are up there with the best. With games provided by Real Time Gaming, quality and quantity are assured. The casino has a mobile version of the casino that is fully optimised and streamlined so that players can play on their tablets or smartphones. Discover the magic of winning, as Michael did!
Play Now