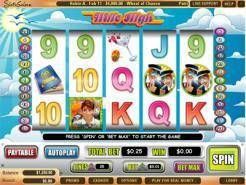 Play Now
A lucky Lincoln Casino player commenced the Memorial Day weekend with an astonishing winning streak that is made up of $96,040 spin on the Mile High slot game released by WGS Gaming. The winner, Darren G said that this is one hell of a Memorial Day weekend, and he will never forget it. The Lincoln Casino manager Ryan Wilson also had something to say. He commented that A lot of players have an excellent weekend at this casino; however, Darren sure did much better than most of them though! This will most certainly be a super-memorable Memorial Day for Darren! On Friday that Memorial Day weekend started, Darren went on a winning streak boosting his bankroll to an astounding $11,000 by playing Lucky 7s slots. Then he switched to another slot, Mile High where his winning streak really started to take off. Darren commented that “Lucky 7s is rather high volatility, progressive jackpot slot game, therefore, I only play it when I have a healthy balance. I played the slot for a couple of hours, just minor wagers, staking about $6.00 on each spin. I was then fortunate to manage hit three purple 7s along with two Wilds. That should have paid $240 but with the two Wilds attached, it swelled with an astonishing 49X multiplier, so in the end, it paid out $11,760. That gave me a really comfortable cushion!” “I continued tempting my luck on the Lucky 7s slot for a little while longer, then figured my time was up, so switched to a different slot game, a 5-reel game called Mile High. It is a kind of cheesy aeroplane-themed slot game, but it has some really decent features that can boost the chances. I won a couple of bonus games and a few free spins with 16X multipliers attached, and they seemed to pop up frequently.” Darren played on for a few more hours, before switched styles entirely to Roulette. He then went on to play some video poker games. He was just about to call it a day when he decided to have one more shot at the Mile High slot game. Forty-five minutes afterwards, and on a free spin, with a bet of $6.25, he hit five of the cheeky Pilot symbols on the three pay lines with the two Wild symbols turning up on each line as well. At twenty-five cents per line that would typically pay out a handsome $2,000 per line. However, the Wild symbols added a multiplier of 16X to the winning payout, so Darren ended up winning another $32,000, on each one of the three lines, with some loose change earned on the five others. In total, he managed to win a massive payout of $96,040. Wilson continued that Darren had been playing with the casino for around five years now and we could not be happier for him gaining this massive win. It is always great when these payouts happen. It ramps up the 'it could have been me’ factor, and especially when players get such a life-changing payout from such a small bet!
Play Now