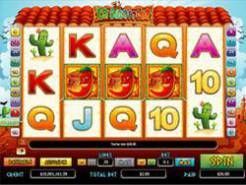 Play Now
People around the world may be familiar with La Cucaracha because this cute little tune can bring laughter and a bit of dancing fun to the mildest of parties. But did you know that La Cucaracha is Spanish for cockroach (or cricket by some definitions). Fortunately, La Cucaracha Slots from wager Gaming Technology (former Vegas Technology) makes the “bug” game fun. This is yet another five-reel, 25-payline game with nice graphics, smooth operation and plenty of chances to win. Symbols include the lovable, musical roaches, cactus, maracas and some standard number and face-card symbols for good measure. Download and Play La Cucaracha Slots !


No Music with La Cucaracha?

It does seem a bit odd that this theme doesn’t come with enjoyable background music. Players do get the reel-spinning sound and the music when you hit free spins, however. Auto-play is an option with this game. As with several of the new games from this developer, coin sizes range from one penny to $10. Since there are 25 paylines you can wager up to $250, which makes things quite interesting. The standard tip of playing all lines for a lower coin value holds true with La Cucaracha slots. Images on the reels appear in bright colors and include that little worm in the tequila. Find him in sufficient quantities and you get a payout of 5,000 coins! The pay table ranges from two of a kind (Jack, Queen) at 5 or (Ace, King) at 10 to five tequila worms for 5,000.

If you see that ominous chilli pepper face you have hit the Wild symbol, which replaces all symbols (except the Scatter) to make winning combinations. Combinations using this character are paid double. Get the Hot Chili on reels 2, 3 and 4 and you fire up the bonus feature. La Cucaracha (the roach) is this game’s Scatter symbol. It pays when appearing on two or more reels. Three or more roaches scattered (or skittering) on the reels trigger the free spin feature in this game. This automatically starts 10 free games in which wins are paid triple. Re-trigger the free games by earning 12 points or more on the Chili OW Meter. In the bonus feature you are presented with four chilli stands. Make the correct selections to raise the meter as high as possible for additional prizes (in coins). Don’t run from La Cucaracha slots. The animation and the graphics make it an enjoyable game.

La Cucaracha like all Vegas Technology games are able to play only at WGT (former VT) LibertySlots Casino .
Play Now

Where to Play La Cucaracha Slots