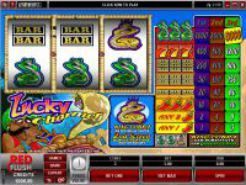 Play Now
Fans of bright colors and cartoonish graphics: Lucky Charmer Slots may just be the slots choice for you! With that cross-eyed charmer playing to his deadly friend and the crisp colors of the pay schedule, Lucky Charmer invites the player to stay around for some fun. But with this fun comes a real slots challenge. This is a three-reel game with one payline, so it certainly isn’t as complex as many of the others. But it should be very comfortable for newcomers and for those who like the simpler, more traditional slots varieties. Don’t look for a progressive goal or a side-game such as a gamble. Lucky Charmer doesn’t have them. There is a 5,000-coin jackpot though, and a free practice mode that will get your interest up rather quickly. This Microgaming creation is categorized as a classic, three-reel game with a bonus.

That’s not completely accurate. You’re not really betting on the cobra but there is a fixed bet of $1 (and three green cobras across the screen pay 1,000 on the first coin, 2,000 on the second coin and 5,000 on the third. Most players will find that it’s best to bet those three coins for a shot at that jackpot. It helps to qualify for the bonus game and gives you the chance to win ever more. There is an “Expert” button that changes your choices to 10x, 5x and Auto Play. A winning combination the reels starts up a short tune from the snake charmer’s flute. Even one red-hot pepper pays three units when you bet the max three coins. Other payouts are two peppers, three peppers, three combinations of the word “BAR,” three 7s and on top of the schedule, those three green, menacing cobras. The graphics are very good but don’t expect that King Cobra to help you other than in combination with two of his buddies. This is not a “Wild” symbol. The King Cobra (in gold) does active the bonus game.

The bonus game allows the player to choose one of the three flutes played by the friendly charmer. This brings up a variety of themed objects with bonuses. For example, choosing a particular flute sets the charmer to playing and in one session an alien figure rose from one basket, an octopus tentacle came from another and a cactus rose from the third. Total winning points for these three was 75. That number shows up in the “Win” button and is then available for betting. This is a simple yet fascinating slots game that is well-designed.
Play Now

Where to Play Lucky Charmer Slots