Deal Or Not Deal classic 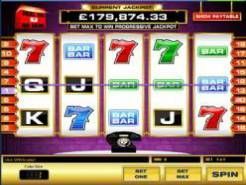 Play Now
Ladies and gentlemen, the show is about to begin! Game show enthusiast and slots lovers unite with this interactive game based on the popular TV show, Deal or no Deal. Developed by GameSys, and one of their most popular games, they are renowned for their highly popular and successful range of instant win games. The game itself has very basic graphics that are subtly animated. But the real fun of this game is in the three bonus rounds and the jackpot which has been as high as £1,000,000. With 5 reels and 20 paylines with coin size ranging from 5c to 20c you can bet all lines from as little as $1.


Making the most of game play

Despite being a progressive this game is available in guest play to try out. So it wouldn’t hurt to play in free play mode to get the feel for the game first. Perhaps the most important tip is to bet on all lines to ensure you get paid out for all winning combinations on the screen. But, that is not enough! In order to activate the bonus round which is the fun to the whole game you need to bet max. Even if you get the symbols, you won’t go through. You will want to build up some credits to wait for the bonus round. You will need them to keep you going while betting max and waiting for the bonus round to be triggered.

Symbols that trigger the fun features

The bulk of the symbols are very basic including different colored 7’s, some cherries and other fruits and some variations on the bar symbols. In addition to these symbols there are three other symbols that in true game show style allow the player to interact with this non-traditional slot. This game has no wild, scatter or other multiplying symbols. The symbols that really matter are the ones that trigger the three different bounds. The triple box bonus symbol, containing 3 red boxes, is the one that activates the mystery bonus round. The single bonus box with one large red box is the one that will start the main bonus game. The telephone symbol gives the player the only opportunity to gamble on their next winning spin. Without a standard gamble feature this can be a lot of fun.

Deal or no deal game is triggered by the 3 single red bonus boxes. It is only in the game are you able to win the progressive. Just like the popular TV show there are 22 boxes and you have to guess how much is in each of the boxes. As each of the boxes gets opened the banker offers up cash. The progressive jackpot may just be in one of those boxes and the bonus game end when the boxes are all open or the player takes the cash that the banker offers up. Getting the telephone symbol means that during the spin of your next win, the game stops and a screen is shown which states that the next spin is a winning spin. The trick is that the winning amount is not revealed. The banker offers the player cash in return for forfeiture of the winnings on that next spin. Mystery bonus round, is a mini game show round and offers you 11 boxes, each box containing an amount of cash. Just be on the lookout, there is a booby trap that may just be hidden. Opening a box with the GAME OVER inside sends you out of the game. But if you are lucky enough and get the WIN ALL prize all the cash in the boxes is handed over whether or not there is a hidden booby trap. This wonderfully interactive game can be played in flash and downloaded version of the software. It is a guaranteed to entertain and enthrall, so download and play this game today.

Where to Play Deal or No Deal Slots