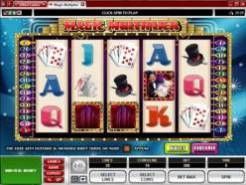 Play Now
Microgaming has introduced such a slot game that it is worth raving about. Magic Multiplier video slot game is magical to say the least. The theme is magicians and captivating card tricks. Besides the magician theme...there is a Cups bonus game...a Free Spins bonus game...and a top jackpot of 10,000 coins. Microgaming put this game live in April 2010! This is a 30 pay line slot game with five reels and you can play coin values of a penny or as much as a dime . You can bet 1-10 coins on each line with a max wager of 600 coins. This is nice because it makes it a slot for novices as well as high rollers. Anticipate one of the 33 winning combinations offered the in Magic Multiplier video slot game.

This slot game has not one...not two...but three scatter symbols and they are the Cups, the Curtain, and the Wheel. A minimum of three Wheels brings on the 30 free spins with a times five multiplier. Free spins can be retriggered. The scattered Curtain will only be found on reels two, three and four but when they appear together you will have triggered the Curtain Feature where your mission is to select what is behind the curtains to find out what you have won. Then...there is the chance to play the Cups feature which is triggered when you get a minimum of three scattered Cups on the third, fourth, and fifth reels. There will be three cups flipped upside down...one has a ball underneath...you want to choose the winning cup...the one with the ball and when you do you can win as much as 25 times what you wagered. This is a pick and win bonus game.

All the stuff in a magic trick...

Marvin the magician is wild so he can be swapped for any other symbols to create more winning combinations for you. The wild doesn't substitute for the scatter symbols. Other symbols that grace the wheels are the Magician with Saw, the Gloved Hands, Hat, Wand, and a White Rabbit...plus the card symbols from Ace to Jack.

Magic Multiplier slot also offers the Gamble Game and you can participate in it after the completion of any game where there is a winning combination. All you have to do is guess the color red or black and if you are right you double what you won. That Magic Multiplier is just waiting on you to step up to the plate!

Where to Play Magic Multiplier Slots