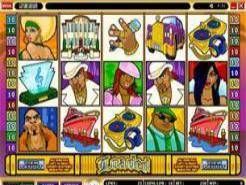 Some words how to play Loaded Video Slot

In Loaded, players have the option to bet between a single penny a line to 25 cents per line. Also, one could bet from 1 and 20 coins/line for bets in the range 25 cents to $125.00 per spin! In short, in this video slot, players could win as much as 560,000 coins. In Loaded video slot, players also have the option to choose the number of free spins they want, each coming with a multiplier. But, the higher the amount, lesser the multiplier one would get. The free spin choices available to the players are: 12 spins with 4 times multiplier, 16 spins with 3 times multiplier, and 14 spins with a 2x multiplier. In Loaded video slot, the scatter symbol is a diamond ring hand hold in a "W" formation. When you play, if you get two "W" in any pay line, you'll get twice your original bet amount. Three or more scatter symbols on the pay line wins bonus spins, plus a 5x, 20x, or 100x of the original bets respectively (for three, four and five "W"s). The Wild Symbol is a man wearing a "777" (triple seven) necklace. If a player manages to hit five wilds on a pay line, he'll get a whooping 7000 times the original wager amount. Further, if you get two or more triple sevens, you'll be awarded a scatter pay. Also, three or more of the wilds sends one to a bonus feature where the player could choose the free spin feature that he thinks best suits him. Other symbols you'll come across in the Loaded video slot are a yacht, mansion, an award and three different ladies.

Where to play Loaded Video Slot

Loaded Video Slot is a gambling feature where one could actually double or quadruple their winnings by guessing few things right. But, on the other hand, getting things wrong could jeopardize one's winnings as well. However, it is not a compulsory round, and one could choose to give it a miss if they don't want to put their winnings in the firing line one last time. This slot game can be found at online casinos are powered by Microgaming software.

Where to Play Loaded Slots