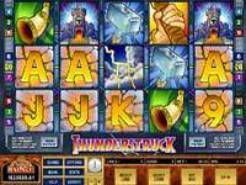 
Thunderstruck Video Slot some words about the game

As evident from the name Thunderstruck, the game is dedicated to the Norse god Thor. Legends say that in a thunderstorm (lightning symbol) marred night, Thor rode to the heavens in his chariot driven by goats (scatter symbol). In the story, lightning struck whenever Thor threw his hammer (the hammer symbol). Thor wore a belt that doubled his strength (fist), while the castle and horn are other symbols associated with him, as you’ll find out while playing the game. When you play Thunderstruck, you’ll hear the wind blowing behind scene and the drum beats of the warrior, and every winning combination you strike is treated to the sound of lightning and flash in Thor’s eyes. As you slowly get absorbed into the legend of Thor, it is when the real excitement begins.

How to play Thunderstruck Video Slot

The Thor is the Wild Symbol, and it can substitute any other symbol save the Scatter Horn symbol. Also, the Thor symbol doubles the payout, whichever combination they complete. Further, if you get two or more Rams on the five reels, you just win.

In the bonus front, every player will get 15 free spins if they get three or more Rams on anywhere on the five reels. Further, if the player manages to get three or more Rams in any of the free spins, he’s entitled for another 15 free spins. That’s lottery! Any win on any activated pay line enables a guess the suit or guess the color game, which is nothing but a Bonus Gamble game. Guessing the color right results in doubled winnings, while getting the suit right leaves your winnings quadrupled. On the other side of the coin, if you get the guesses wrong, you’ll lose the winnings as well. Hence, for players who don’t want to take the gamble, they can opt not to do so. It isn’t compulsory. Thunderstruck Slots information

Where to Play Thunderstruck Slots