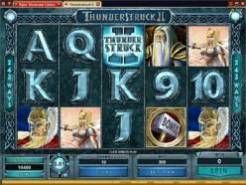 Symbols in Thunderstruck II are key characters from mythology. You'll find Thor (30 to 500 coins), his bonus hammer (1 to 200 coins), Loki (20 to 400 coins), Odin (30 to 450 coins) and Valkyrie (20 to 350 coins). Poker symbols make up the bottom range of prizes worth 5 to 150 coins. The Longship and Asgard are worth 15 to 300 coins. The Thunderstruck II online slots logo is the game's wild card. Use it to substitute other symbols to create winning paylines. In addition, five of these logos offer the top jackpot of 1,000 coins. Land any of these symbols in free spin rounds and watch your prize grow. On a 6x multiplier, your 1,000 coin prize rapidly increases to 6,000 coins.

The Wildstorm feature appears randomly during game play. If this happens, up to five reels turn wild. You cannot retrigger free spins during Wildstorm, but having wild reels quickly boosts your winnings.

The Great Hall of Spins Bonus

Where to Play Thunderstruck II Slots