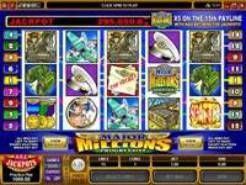 
Military and Monetary As Well

The theme of Major Millions Slots is obviously military as well as monetary. This is easy to ascertain simply by taking in the myriad of reel images such as the Major himself, planes, tanks, battleships, and even secret treasure chests. You can also observe reel icons representing Top Secret papers, cannon, military medals, military hats, field binoculars, and a case of ammunition are all represented in this fun and interesting game. You’ll also hear a brisk military march interspersed with the sound of a cash register.

Major Millions Slots makes all of this military symbolism seem light, breezy, and just plain fun. However, the amount of money that can be won playing Major Millions slots online is serious business indeed. With 15 paylines, players have many chances to win, plus winning with Major Millions is as simple as getting three or more of the same icon symbol on a payline that has been enabled. The Major is the Wild symbol, and can increase the amount won by 100% when just one of these icons appear. Two Major icons can boost a payout by 400%. The Major can substitute for any other symbol when making winning combinations except for the Scatter Explosion symbol. It should be said that some combinations that include the Major icon could be more lucrative than others could.

Where to Play Major Millions Slots