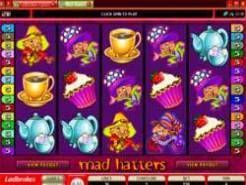 Play Now
Let The Tea Party Begin with Mad Hatters Slots . Microgaming’s Mad Hatters Slots is a five-reel slots experience with thirty paylines. The theme of this game was apparently taken from the beloved classic tale of Alice in Wonderland, and the colorful background and icons hold true to this premise. Players will enjoy the quaint designs that represent some of the characters from this popular story. If you enjoy this slots offering from Microgaming, you may well enjoy the USA casino no deposit slot tournaments , which feature slots games with similar cute themes.

While you won’t see Alice represented by a reel icon in Mad Hatters Slots, there are several others that will remind you of the Wonderland storyline. There are three Mad Hatter icons called Jeff Mad Hatter, James Mad Hatter, and John Mad Hatter. There is also a Rabbit, a Tea Pot, a Tea Cup, slice of Cake, a Cupcake, and an Ice Cream Sundae. There are various other symbols in the game that boast of video animation effects. These are seen when players hit certain winning combinations.

Mad Hatters Slots has five reels, thirty paylines, and is said to have 33 winning combos, similar to some of the popular games at Lincoln Casino . Mad Hatter Slots also has a large maximum jackpot of 20,000 coins, and a maximum bet of $75.00. The Mad Hat icon is the Wild symbol in this game. Its job is to be a substitute for the other symbols except for the Scatter symbol.

Bonus Game and Wild Symbols Add To the Fun

There is a second screen in Mad Hatters Slots that is home to the Cuckoo Bonus game. If a player gets three, four or five of the Cuckoo Clock symbols to line up on the reels, this bonus game is activated. The Cuckoo Bonus Game is known as a “Pick Till You Pop” game. If the Pop symbol is picked, the game will be over. The Wild symbol for Mad Hatters slots is the Mad Hat icon, which will substitute for other symbols that are needed in order to make up a winning combination.

The Scatter Symbol and the Free Spins Bonus

The Scatter symbol is the Rabbit, which can of course be scattered all over the reels. Last but not least is the Free Spins bonus feature. Players who get three, four, or five of the rabbit symbols are eligible for up to fifty free spins. Happily, every win that takes place during a free spin is doubled. You will get a lot of pleasure out of Mad Hatters slots!

Where to Play Mad Hatters Slots