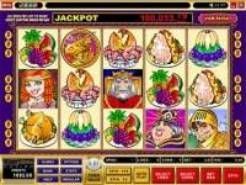 Play Now
If knights in shining armor and damsels in distress the stuff of your dreams then King Cashalot is definitely the place to be. Microgaming has another winner on the reels, enough to get pretty excited about the game. The medieval theme just begs to be played. Excellent graphics that just jump out at you, the music is typical to a king’s banquet it’s sure to get the toes tapping. To get the best benefit it’s advisable to place at least one coin on each payline, over 9 paylines that’s a .45c spin, the coin value is only .5c a line the max bet is only $2.25 on all paylines, inactive paylines on the 5 reels will not payout. If your bankroll is very low keep you wagers low while you build up your reserves although I doubt that $2.25 will really break the bank. For such a low wager on the spins this game is surprising generous. Join and start plying King Cashalot Online Progressive Slots


Going back to the days of yore

The graphics of this themed game are quite striking, with King Cashalot himself and the smiling knight in his shining armor, the queen with her fiery red hair and a smile to melt any knight or kings heart, and attractive damsel the funny fella the court jester and a smoking dragon to complete the scenario, and what medieval theme would be without those mouthwatering banquet feasts… certainly fit for any kings table. The payouts of the symbols rank according to the hierarchy of the court with the king being the highest paying symbol, followed by his beautiful queen, that shining knight followed by the damsel. This game is a progressive jackpot which means that large amounts of money could be won; the jackpot starts at a minimum of $100,000 and progresses until it is won, then is reset to $100,000 to start all over again. To be eligible to win the jackpot you must have bet max bet since the max bet is only $2.25 it worth considering playing.

You will definitely be please to see King Cashalot as he is the wild symbol and stand in to complete winning combinations, when it appears once you double your winnings and if he appears two times then you winnings are quadrupled which makes this a great multiplier symbol as well as a wild card. In addition to being the highest paying symbol on the reel he really goes overboard when he appears five times on the ninth payline and you will hit the progressive JACKPOT!! Jesting to get those winnings the court Jester symbol does its job of jesting as well as acting as the scatter symbol, found anywhere on the reels and you receive payouts check the paytable for the amounts you can win.

The highlight of the game is about to be revealed…

Who’s afraid of dragons!! Not on this slots game as when three golden dragons are found on the second, third and fourth reels the bonus game is triggered. You are taken to a new screen when King Cashalot offers you the choice of eight treasures chests, but this is no ordinary choice. Once you have chosen one treasure chest you then have to choose to gamble or not what you have won on that chest. Remember, if you decide to try for a larger payout you will forfeit the first choice. There is always the chance that it might be less than what you got or considerably more, this is decision time and you have only three chances of changing your mind. Each amount in the chests varies and is a random figure, the highest award you can win on any of the chests is 1,080 coins, the payout is decided by the multiplier, times the coins bet times the number of active paylines. So to benefit make sure you have all the paylines activated. To play on King Cashalot progressive slots game you need to open an account at the casino of your choice that has the game, fund it and enjoy the gaming.

Where to Play King Cashalot Slots