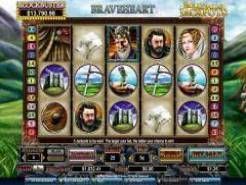 Play Now
Cryptologic had once again captured an award winning movie to add to its stable of interesting slots game, Braveheart slots is sure to excite the most ardent movie goer. The video themed game is based the Scottish rebellion that was led by BraveHeart also known as William Wallace, with 25 paylines on 5 reels it has twenty three winning combinations, which gives lots of chances to win. Play Braveheart Slots and win is all part of the enjoyment With 25 paylines it can get quite expensive if your bankroll is not very big, but not to despair as you can play a low as 1 penny per payline up to $20 for those who aim high. With twenty three winning combinations give you lots of chances to fill your account with all those wins.


Symbolically the scatter you keep the reels spinning

Those lovely spinning symbols that keep you interested are the scatter, find two or more Weapons symbols anywhere and they will payout, it does not need to be on an enabled payline to give you a win. The calculation of the winnings is the scatter combination payout as it is shown on the ‘payout schedule’ and multiplied by the total amount of credits bet. When three or more Weapons scatters are shown on the reels it will trigger the “Battle Free Spin” bonus feature. This scatter has an extra chance to win, should you have a scatter win as well as a regular win at the same time you will be paid for both.

While the wild offer a whole lot more

The Braveheart symbol is the wild card, while he bravely substitutes for all the other symbols except the scatter symbol. Not only does symbol substitute it also multiplies by paying out double of any winning combination that it complete while it acts as a substitute. The Braveheart wild symbol when displayed three times on a reel will ‘stack’ and become the Braveheart Stacked symbol, increasing your winning chances. Should there be more than one winning combination on a payline then only the highest value combination will payout. Other symbols that carry various payouts according to the payment schedule are Longshanks, Princess Isabella, Robert the Bruce, the Battle, a Castle, Breaveheart’s sword, Peasant Shield, The Thistle flower and an Embroidered Handkerchief.

Ever wondered about the kilt?

The kilt symbols is unique, as it awards when it appears at any place on the second, third and fourth reels at the same time. This triggers the “Kilt Lift” Bonus round, you then get a chance to pick ‘a kilt’ that will literally ‘lift’ to reveal the bonus prize won. There is also a second chance to pick the ‘win all’ award. The ‘Kilt Lift’ bonus round offers wins of up to fifty times the triggered bet. This ‘Kilt Lift’ Bonus round can also be won when the Battle Free Spin Bonus feature is activated, but you will not be doubled in this section.

The triggering factor for the ‘Battle Free Spin’ Bonus is the Weapons scatter symbol, when it is displayed on any of the five reels. You are then awarded ten free spins. Every winning combination is doubled. You will see a message below that shows the number of spins that remain after each reel spin. During this Free spins rounds the battle will be fought between Scotland and England. Every time Braveheart appears the Scottish side is advanced, however the opposite happens when Longshanks appears, then England advances. During this battle when the Scottish side is ahead at the end of the free spins you will be awarded a ‘battle bonus’ of one hundred times the triggered bet. Once the Battle free spins bonus game is complete, you will be taken back to the regular part of this slots game. Your winning will be added to your account. This game also has an autoplay option which you can set to your own choices of number of coins and spins. Play for free to learn the strategies of the game then you can pay for real money. Enjoyment and excitement is a winning combination in this battle for supremacy. Download now and start the video battle rolling.

Where to Play Braveheart Slots