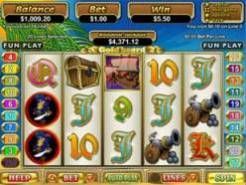 Play Now
Shiver me timbers, mateys! This be a video slot about Pirates, arrr. It's full of swashbuckling and skullduggery on the high seas, with plenty of chances for laying hand on some loot. Pirates (the kinds with eye patches, not the kinds that download mp3s) seem to be extremely popular these days. In this game you'll help Captain Goldbeard sail his pirate ship across the ocean in search of booty. The game features excellent graphics and a random progressive jackpot that you could trigger on almost any bet at all.

Goldbeard is a five reel video slot game, which right away tells you that you can play more than just the center line. In fact, Goldbeard starts off with 20 different pay lines activated – although nothing is stopping you from turning a few of them off. The game's progressive jackpot strikes completely randomly, so you have just as much chance of hitting it whether you play all 20 lines or just 1. However, playing a larger number of lines gives you a greater chance of winning the standard jackpots on each spin. Simply choose your coin size (the game takes between 5c and $5 a line), and press the Spin button. It's as easy as that – there's even an Autoplay feature if you don't feel like mashing the Spin button.

Who's onboard this ship?

The symbols used in this game kick off with a set of high playing cards, which are all worth reasonable coin jackpots. However, search the horizon for symbols like the chest of treasure, the Pirate's cannon, and the talking parrot. The Pirate ship itself is worth 5000 coins, which could turn into $25,000 worth of booty, depending on what your initial bet was. Another handy symbol is the gold coin, which can turn up anywhere on the reels. If at least two gold coins are visible, you will win a multiple of whatever your current bet is. And if you're lucky enough to see five, you earn your bet times 100.

Goldbeard himself is Wild, and only appears on the first and last reels. However, if he appears on both reels at once, you win a random number of free spins. During your free spins rounds, everything that you win is instantly tripled, making this an extremely lucrative bonus.

If you would like to take a shot at Goldbeard's treasure, hoist anchor and set sail for HMS Bodog Casino, the pride of the fleet. She's bursting with more treasure than you can shake a cutlass at. Play GoldBeard Slots at WinPalace Casino or at Bovada Casino .

Where to Play Goldbeard Slots