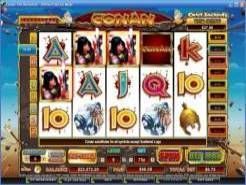 Conan the Barbarian Slots game is crazy and crazy with jackpots

Conan the Barbarian was first created in 1932 and has appeared time and time again in movies, talk shows and fantasy novels. Now he has been brought back to life by Cryptologic, an Ireland based software developer established back in 1995 in their new slots game, Conan the Barbarian. This video slot, so called for the short introductory video, has 5 reels and 9 paylines making it relatively easy to play and understand. The lowest you can set your coin size is 5c and this can be set up to $5 per payline. Betting on all paylines you can play anything from 45c to $45 per spin. Cryptologic has a bet max button which is a short cut to bet the highest coin size on all paylines and spin all at the same time. This game is like no other slot and its uniqueness lies in its 9 jackpots! The highest jackpot is 750 coins which can be as high as $3750! Download and play Conan the Barbarian Slots now!


How to place a winning bet

Each payline is allocated a Crazy Jackpot and you can only claim a jackpot from a win if that payline is activated. As always bet on all paylines. There’s nothing like a bucket of cold water to dampen high gaming spirits! Since the max bet is only $45 this is a perfect beginner game. Always analyze the paytable and play for fun before playing for real money.

Conan is a real wild one, so wild that he will substitute for any other symbol on the reels. In fact he is even more wild than that, when Conan unanimously dominates an activated payline, the jackpot for that payline is paid out. The scatter is the game’s logo. Three scatters will pay out 5 times your win, get four scatters on the reels and the win on that spin is multiplied by 20. 5 scatters on your screen will pay you a barbaric 100 times your win! The scatter is also your key to the bonus feature. You just need a minimum of three scatters and the bonus round is yours. You will also find a lady warrior and a golden helmet along with jacks, kings, queens and ace symbols to fill in the remainder of the lower paying symbols.

Pick your skull and make your day

The bonus round is the Cave of Skulls. Conan the Barbarian was off on a mission and happened upon the cave full of old skulls from defeated warriors. If you can set your fear aside and select skulls there will be prizes for bravery under each. There is a trap that will send you back to spinning reels. Cryptologic has added advanced features as well as captivating graphics to this entertaining video slot. This mode will allow you to set the game on autoplay. Autoplay settings will stop the reels on a big win, on a low balance and so you can play the bonus round yourself.

On with the fun

Be a hero and fight your way through the reels and out of the cave of skulls. Play this game now at any one of Cryptologic’s casinos and win with the multipliers and jackpots like you have never seen before.

Where to Play Conan the Barbarian Slots