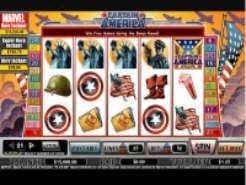 Play Now
Being one of the most respected Marvel superheroes of all time, it seems only right Captain America should have his own slot game. Thus, Cryptologic created the Captain American slot for his biggest fans . Players can follow their favorite hero through adventures where they help him face his foes and work toward a massive top slot reward of 12,500 coins. In addition, those brave enough to walk alongside Captain America can have the opportunity to drop one of three different random progressive Marvel jackpots. Just when fans didn’t think the Captain America slot could get any better, Cryptologic added wilds, scatters, free spins and a fun bonus to the game!

Those players who have never played Cryptologic’s Captain America slot should first familiarize themselves with the payout structure, coin value choices, wild symbols and the scatters. This is a multi line slot game, with coin values ranging between $0.01 and $5.00. We recommend players play as many paylines as they can and adjust their coin sizes afterward to adhere to their casino budget. Playing the most paylines possible will result in the greatest chance of winning. This 5 reel, 20 payline slot comes with a top award of a 12,500 coins which is amazing in itself. However, with the inclusion of wilds, scatters, bonus rounds and free spins, this is a game not to miss!

Like the other Marvel Slot Series games, Captain America slots come with incredible graphics from Cryptologic’s team of designers. Players can expect to see many patriotic symbols, such as the Statue of Liberty, the American flag and military helmets. Players should be mindful of the Captain American symbol, which acts as a wild in this slot and can substitute for all other icons (except the scatter) to help players form winning combos where they otherwise wouldn’t be able to do so. Lucky players who drop five of the Captain America symbols on an active payline will win the top award. The scatter symbol in the Captain American slot game is the Captain America logo. This symbol will give players a multiplier win to their total bet when one or more are landed. Players who land 2, 3, 4 or 5 will get their total bet multiplied by 1, 5, 15 or 100 times (respectively). Those who spin three or more will be whisked off to the bonus round.

If you love free spins, Captain America can provide! The free spin feature is triggered during the bonus round, for those who do successful. The game’s Bonus Round is among the best in the industry. Players take on the role of Captain America himself and use his famous shield to bring down enemy planes hovering above. The goal is for the player to destroy five of the war-zone planes, after which they will be given cash prizes and free spins as a deserved heroic reward. Download InterCasino today to try your hand at being Captain America’s superhero slot sidekick! If you want to know more about bonuses and promotions, read our InterCasino review.

Where to Play Captain America Slots