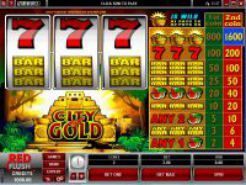 Play Now
Can you imagine what it would be like to stand in a City of Gold? Neither can we, but we can get closer to that reality by checking out the City of Gold slot game. This would look strange if it didn’t use gold as a key color theme, so you won’t be disappointed that is exactly what greets you! But will you return from this city with some of its riches, or will the trip turn out to be a disappointment?

Format of reels and win lines

You’ve got the lowest number of reels in this game, with just three available to spin. That means you only need to be concerned about wagering on one line.

The game permits players to use one or two coins whenever they take it for a spin. The lowest coin value is a quarter, which is probably way higher than you might have guessed. The highest is five dollars.

Special symbols to look for in City of Gold

A bowl made from gold holding lots of gems… that sounds like something you would want to find, doesn’t it? Not only is this the wild for the slot, it also brings one of two multipliers whenever it appears. If one appears as part of a win on the payline, it awards a x2 multiplier. But if you do better than that with two wilds plus something else to garner a win, the multiplier is boosted to x4.

So… does City of Gold offer some bonuses as an extra treat? No, it doesn’t. The wild is the main attraction in this game, and since it offers some significant multipliers, that should be enough to keep you going.

We have yet to mention the jackpot in this game. It’s not gold, but you could win as many as 1,600 coins if you managed to trigger it. That is the prize for a two-coin bet, with a lower amount awarded if you only played a single coin. You must get three wilds in place on the payline if you want to trigger the prize to be paid. This is a nice game to pass the time with, and it offers more than many standard three-reel games. Does it have the golden touch for you though? Try it and see.
Play Now

Where to Play City of Gold Slots (Microgaming)